Students from the School of Media and Communications studies participated in the 'Great Debate' organized by the British High Commission, New Delhi. BA JMC students Gauri, Saloni, Divya and Manjeet participated in this all India Inter-university debating competition held at the Sri Venkateshwara College, Delhi University in New Delhi. The event began with an inaugural address by the Hannah Cockburn, Head, Political & Bilateral Affairs, British High Commission. Students were put to rigorous preliminary rounds of debates in different pools, with topics ranging from global energy security to compulsory voting rights. GREAT Debate has a unique approach that provides an informal but highly rigorous debate experience for all involved. It should be stressed that the British High Commission did not issue judges with narrow criteria for arriving at a decision, but instead asked them to simply decide which side of the debate, for or against, made the most convincing argument. 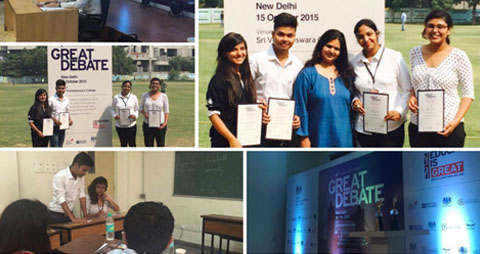