The programme witnessed participation of 18 teams with 54 participants in total from different colleges and Universities from all over the nation. The moot problem was released in the month of march 2021 and covered several subjects of law such as IPC, Indian Evidence Act, Criminal Procedure Code and many others. On 21st may 2021, the programme started with the final registrations of teams, trial run on our online platform which followed by Researcher's test where the knowledge of researchers was tested on facts & law, Proper Analysis, Extent & use of research, Clarity, Correct Research skills, Citation & editing skills.

On 22nd may 2021, The much-anticipated competition started with the welcome ceremony which was graced by the Mr. Navin Kumar Jaggi, Life member of Supreme Court Bar Association, CEO - JAGGI JAGGI AND JAGGI INTERNATIONAL ATTORNEYS AT LAW.

The Preliminary Rounds were then conducted in two phases between 11:30am-5:30pm.where counsels of each team presented their case and were judged by legal luminaries and our esteemed Faculty members of School of law.

The day ended with the announcement of results of the team that had made it to the semi finals which was shortly followed by the draw of lots and exchange of memorials for the same.

The Semi-Finals & Finals were held on 23rd may 2021 that is today in morning and afternoon session. The hard-fought semi-final led us to the finals.

The valedictory ceremony was graced by Our Guest of Honour for the Event and Final Round Judges:

And our Chief Guest for the event: Chairman Public Service Tribunal & Former Judge, Uttarakhand High Court, Hon&rsquoble Mr. Justice UC Dhyani, in his address made a very interesting point where he mentioned that he believes a good lawyer is one who knows how to present his arguments no matter how weak it is. He shared his days of hardwork with students which not only encouraged them but also gave hope to participants who could not make it to finals.

The First Prize of Rs. 40,000/- was bagged by Thakur Ramnarayan College of Law, Mumbai

The Best Memorial award of Rs. 10,000/-was also won by Raffles University, Neemrana

The vote of thanks was given by Mr. Kalrav Krishna Tripathi, Convener, GUNTAC, 2021 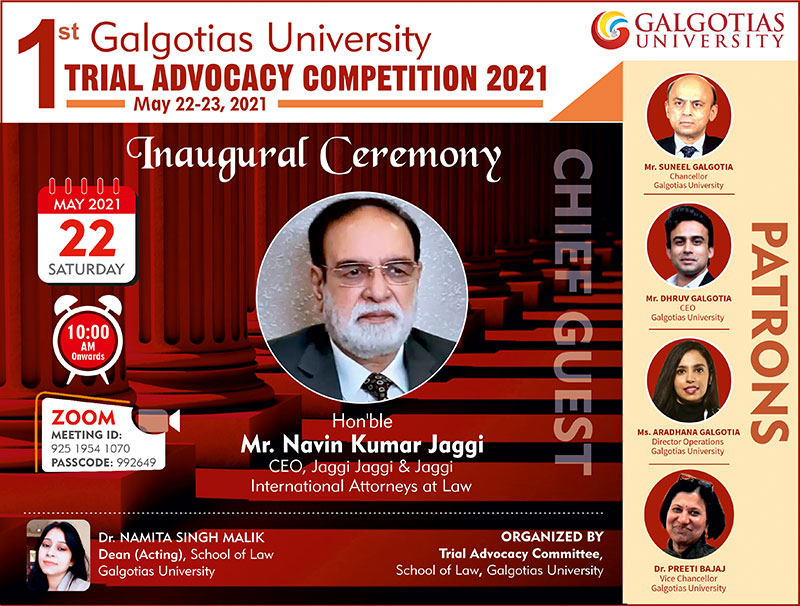 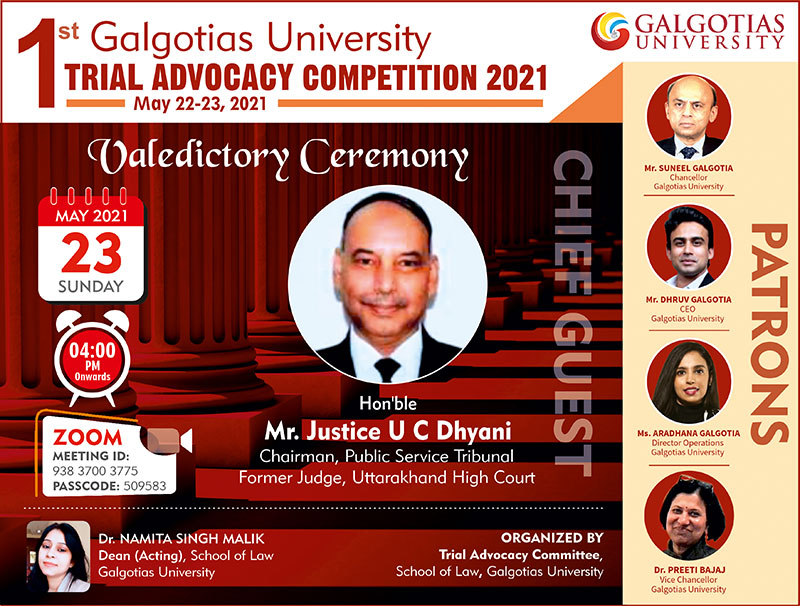 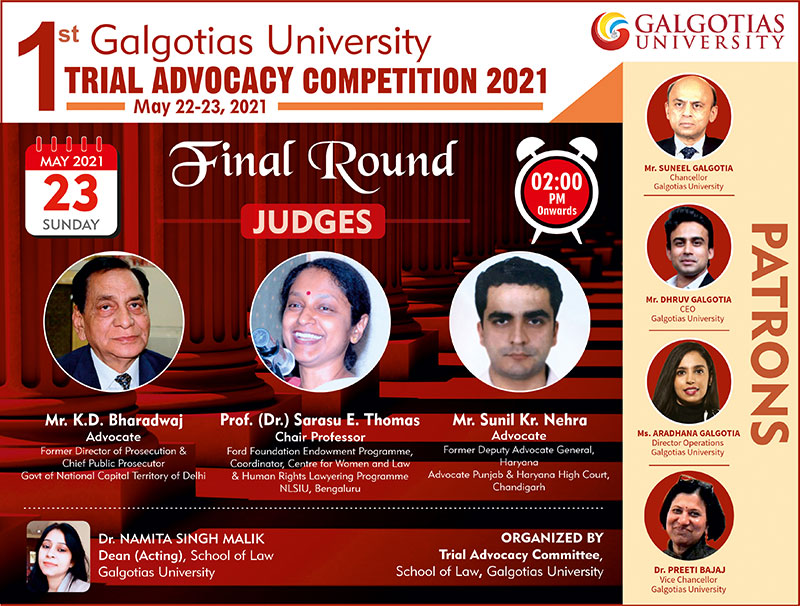 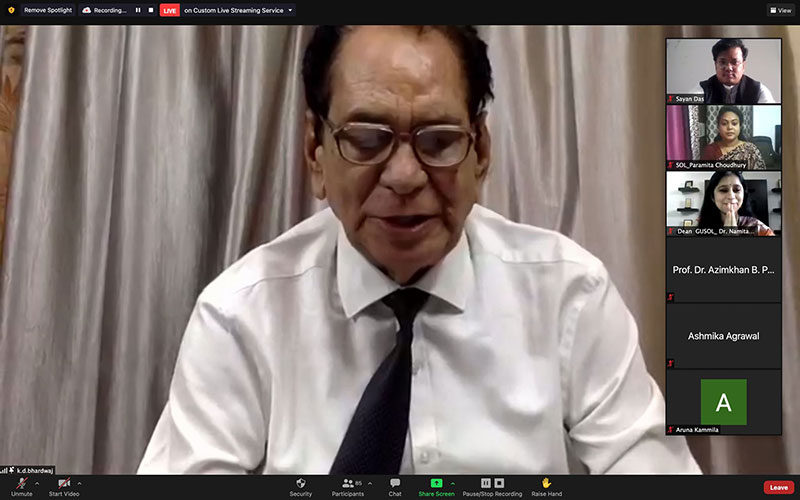 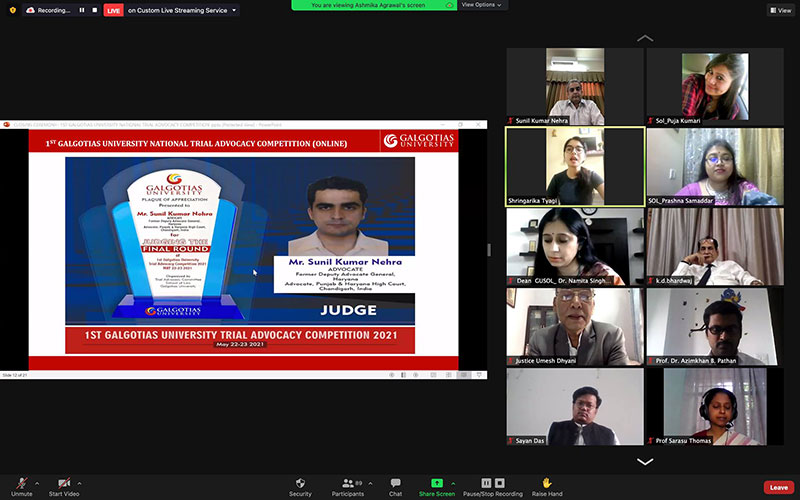 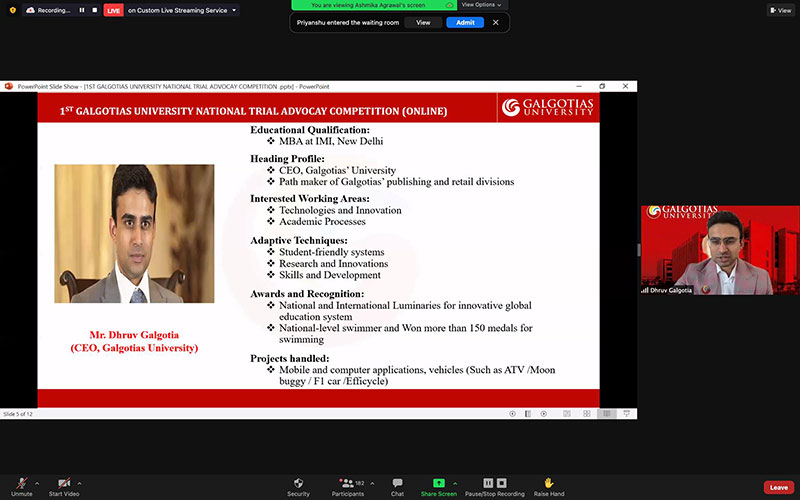 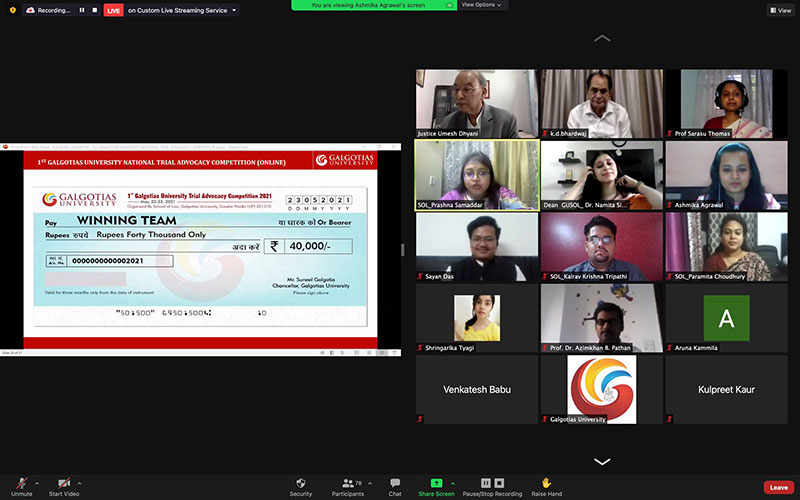 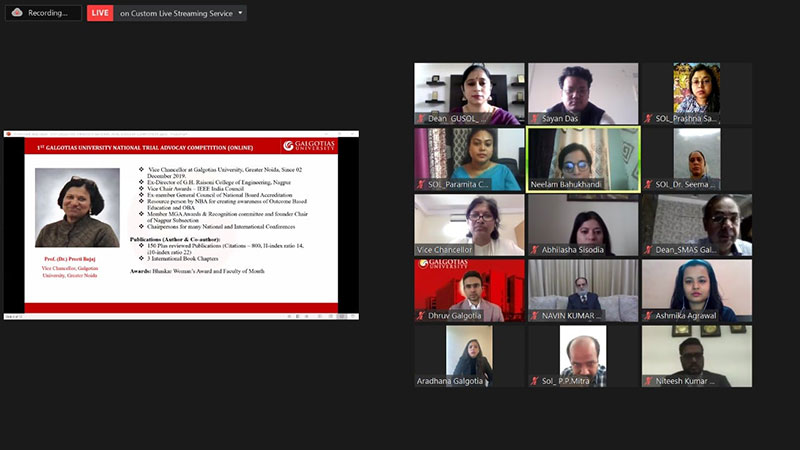 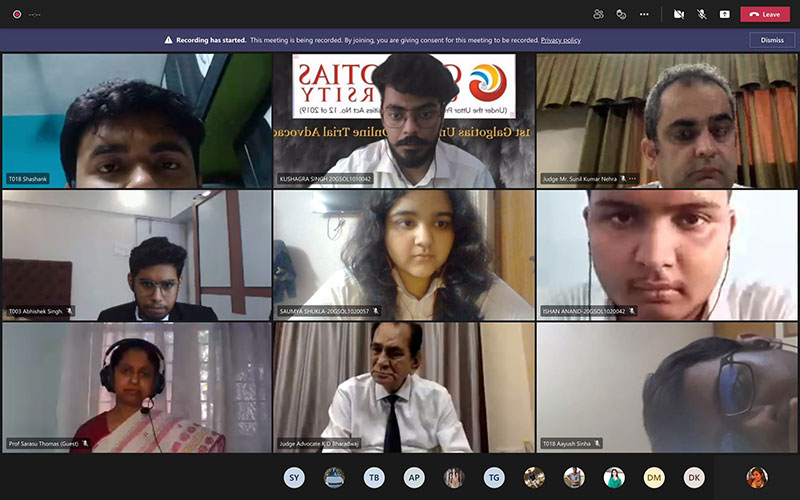 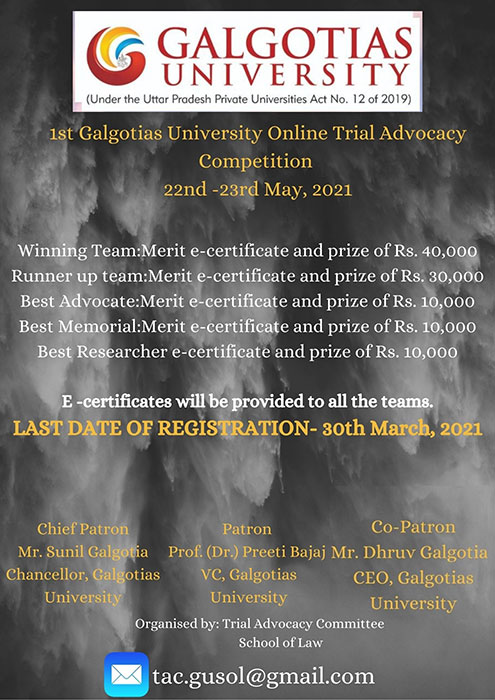 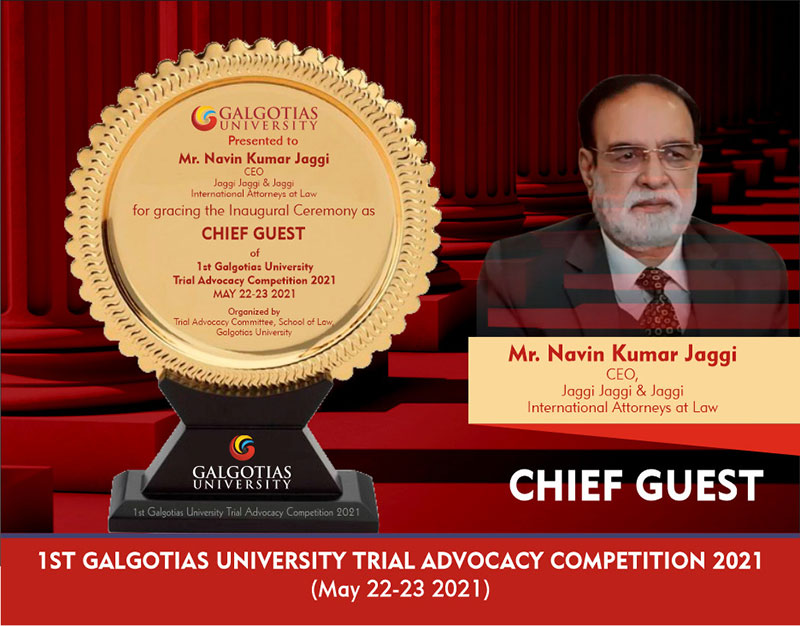 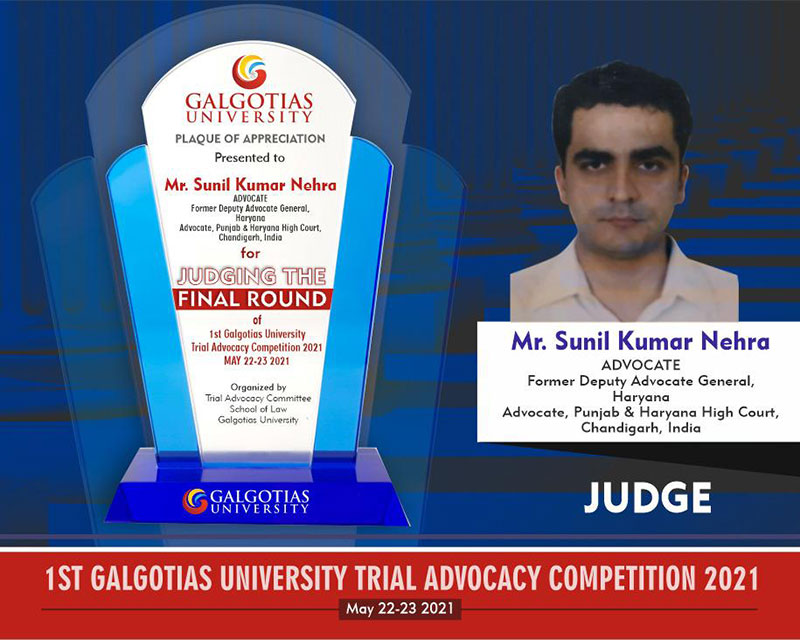 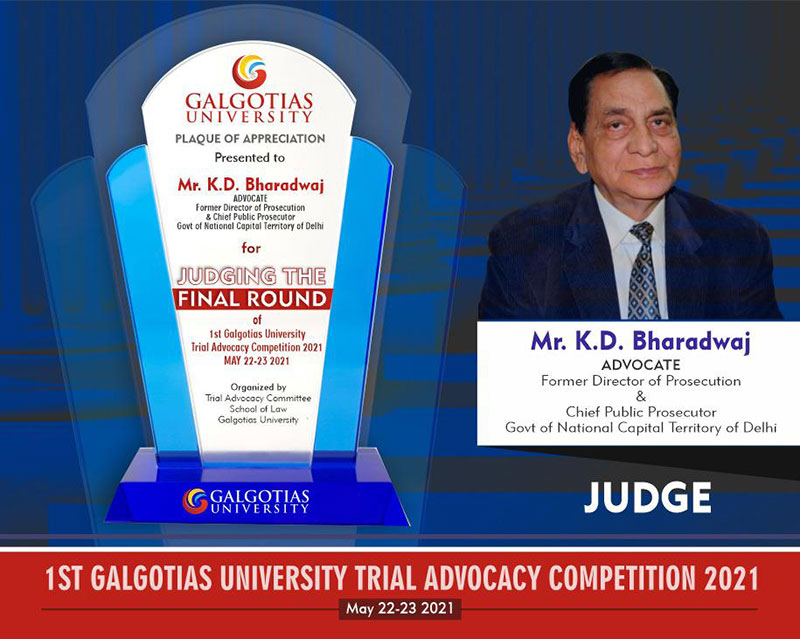 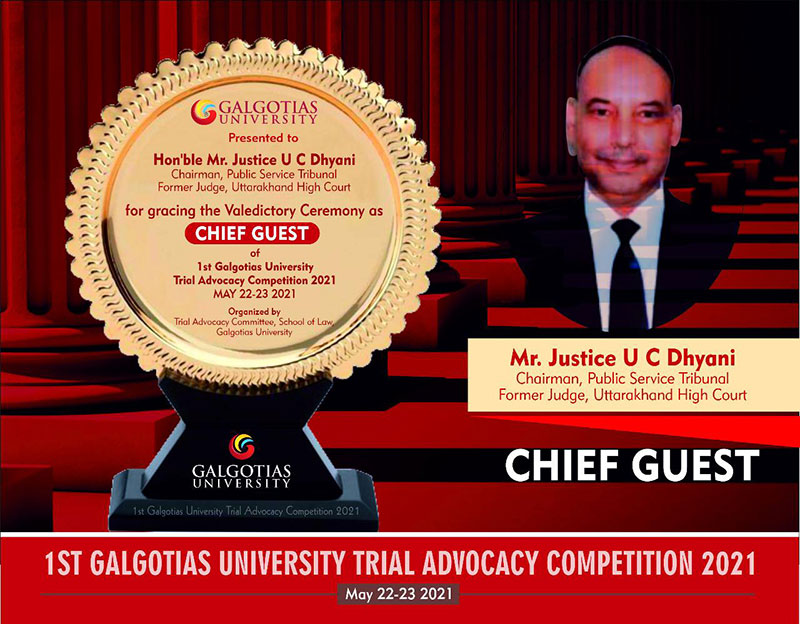